Whatever age you are, ‘right now’ is the best time to start learning a language

What advantages do younger people have when learning a new language? 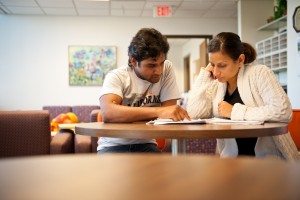 It is evident that children and teenagers find it easier to learn a language due to cognitive reasons. According to research, both the “associative memory and incremental learning elements of language learning are compromised by age.” In addition, there is the simple fact that the sooner a child begins, the more input they will receive in the target language. For these reasons, parents that would like their child to know more than one language are advised to give them a head start by introducing foreign languages to them sooner rather than later.

However, these facts don’t mean that adults shouldn’t learn languages, or even that they will necessarily be worse than a child at learning a language. For example, it is often said that only children are able to reach a ‘native like’ level of proficiency in their target language, especially when it comes to accent and pronunciation. But the truth is that there are plenty of adults who achieve a ‘native like’ accent as an adult, by simply working hard on their accent and eliminating ‘fossilised’ mistakes from their language.

In fact, scientists are still not entirely sure that children are intrinsically better language learners than adults. It could still be a case of nurture rather than nature. For instance, the way we act around children, by grading our language, exaggerating our body language and correcting their mistakes, creates an ideal language learning environment. If it takes a baby four or five years of full-time study to learn their first language reasonably well, who is to say that an adult couldn’t do it quicker given the same degree of immersion?

What advantages do adults have when learning a new language?

Adults have a whole host of skills that enable them to learn a second language well. It’s very easy to concentrate on the things you can’t do – such as speak another language – and forget about the things that you can already do really well – such as read, write and distinguish between different sounds. An adult that is fluent in English and wants to learn Spanish, for example, can use the massive amounts of overlap between the two language to their advantage.

For instance, English has lots of vowel sounds while Spanish has only five (a,e,i,o,u), but they are five that English speakers already have in their own language. Spanish speakers can be relieved that there is less conjugation of verb tenses in English. And both can enjoy  all of the cognates between the two languages. A five year old listening to a Spanish speaker might not understand words like “dimensión,” “elemental” or “experimental,” but any adult English speaker will recognise these perfect cognates!

Not only that, but adults who want to learn a language are equipped with useful study skills, such as motivation, concentration and discipline. If you’ve ever watched a classroom of young learners, you’ll quickly become aware that the majority of children struggle to even sit still, let alone listen to what their teacher is saying. And while children are usually only exposed to language through the decisions made by their parents, adults are able to make their own decisions and select their own environments for language learning. This means they can do very useful things like meet people for practice in a coffee shop, go abroad, or attend a Spanish Tutor DC seminar.

What’s the best age for you to learn a new language?

The “I’m too old to learn a language” mindframe does nothing but hold people back from success. Both children and adults have their own set of advantages when it comes to learning languages. While one may have more mental elasticity, the other might have a greater ability to concentrate, study and organize their thoughts clearly.

Even if it conclusively were proved that children are better learners than adults, the idea that youngsters are better at learning languages so adults should not even try misses a key point. You don’t learn a language solely so that you can claim to be an expert linguist, but also for the benefits it brings to you as a person. For example, no one doubts that the average twenty-something will be better at physical activity than the average seventy-something, but does that mean that a seventy year old should simply be content to sit in their chair? Absolutely not, there are a range of physical and emotional health benefits that can be gained by adults from movement. In a similar vein, it’s ludicrous to suggest that adults should miss out on the cognitive, social and emotional benefits of language learning, simply because they might not learn in the same way that a child would.

Don’t let a mindset stand between you and a range of benefits that adults can get from learning a language. Spanish Tutor DC teaches students of all ages and abilities. Find out how today.